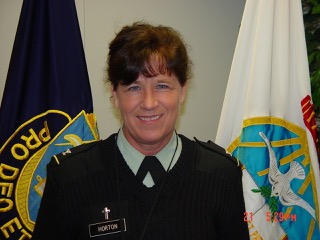 The Appleton Museum of Art will host a Veterans Appreciation talk, “Birth of a New Idea,” by Chaplain (Colonel) Janet Horton on Sunday, Nov. 10, 2 p.m.

Chaplain Horton will share her remarkable experiences and how her deep faith in the promises of the Gospel and the idea of unselfish service brought her to change minds and hearts of many in the military.

Chaplain Horton was recently inducted into the U.S. Army Women’s Foundation Hall for Fame as one of the first women Army Chaplains. She is also the first woman promoted to colonel in the Army Chaplain Corps. Horton served in the Army for 28 years and during this time supervised religious support for Joint Task Forces in Albania, Macedonia and Kosovo. Additionally she was present at the Pentagon on 9/11 and was part of a chaplain’s team that prayed with victims and aided families.

An accomplished author, Horton wrote “Cracking the Camouflage Ceiling: Faith Persistence and Progress in the Army Chaplaincy During the Early Integration of Women in the Military.”

Add to my calendar