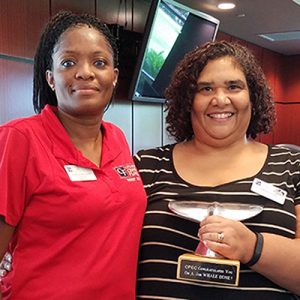 Chenita Hart, assistant director of Admissions and Advising Services, received the Career and Professional Employees Council Whale Done Award from Tamala Williams July 26. The Whale Done award is passed quarterly from the current award holder to another person on campus who has gone above and beyond in service to the college.

The CF Advising Team  at all campus was recognized with a Patriot PRIDE Walk-in-WOW! July 26. Results from the second quarter Rate-Us-Now surveys showed that 90 percent of students either agree or strongly agree that advisors are meeting the CF PRIDE standards –Professional, Responsive, Informative, Dependable and Engaged. Don’t forget that all CF employees can recognize colleagues at any time by submitting a WOW! card online. The process only takes a few seconds and all comments appear on the WOW! wall for all employees to see.

General Counsel and Director of Governmental Relations Rob Batsel was appointed to the Fifth Circuit Judicial Nomination Commission by Gov. Rick Scott. Batsel fills a vacant seat and is appointed for a term beginning July 12, 2016, and ending July 1, 202o.

Dr. Ron Cooper’s poem “Apollo 11” appears in the current edition of literary journal “Fall Lines.” Cooper is a professor of Philosophy and Humanities. 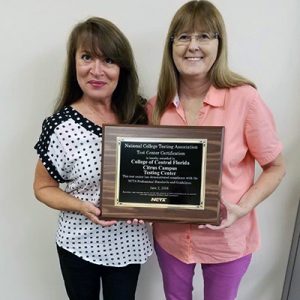 Thank you, Patriots! More than 40 staff and students volunteered at Information Stations during the first two days of fall classes to welcome students to CF.

All 2016 graduates of the Surgical Technology program passed their certification exam in July. Eleven new Certified Surgical Technologists are ready to take on the world. Congratulations to program manager Wendy Kinney and team.